Welcome To The Roger Wilson Guitar Studio of Atlanta est. 1973 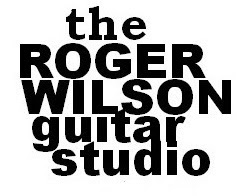 Posted by Unknown at 1:59 PM No comments:

OCD or No OCD. That Is The Question 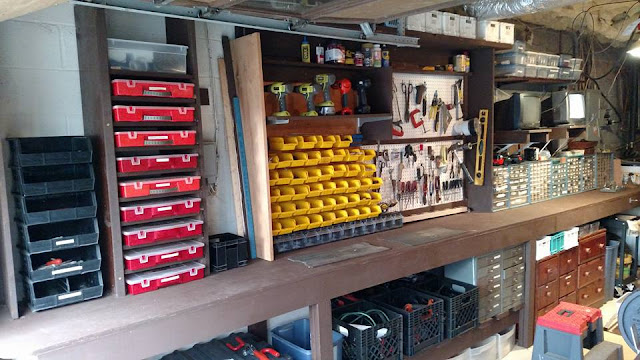 While this subject is away from any music topic, and that I am really spending more time writing about it that I ever thought I would, this workshop reorganization really required focusing elsewhere in order to make this garage great again. It has and will have a trickle down effect into everything I do in life and in my career. The clutter and disorganization was getting way out of hand. Part of it stemmed from having to empty out my folks house in Jersey back in the late 90's that they lived in for over 40 years. Everything I ever did in this garage to this point was either makeshift or temporary. It would work well for a while, but then it would change and then escalate into utter confusion.

My project began by permanently installing a 20 foot workbench that would give me an ample and clean workspace. This concept was preached to me by my dad years ago. He was a mechanical designer that would sit for hours at a drawing board, uncluttered of course, and could sketch out details on blueprints designing machinery that I would put up against any computer printout. That being said, he embraced technology way before many of us even knew what the term meant. He bought an early Radio Shack computer, which almost sent my mom over the edge. He was learning DOS as fast as it developed and had one of the first Compuserv and AOL accounts. He warned me that everything I did in my life later on would be originating out of this, pointing to spec in a diagram, which he explained as being a computer chip. It seemed like a long way off for me at the time to take it seriously. That was in the 60's. When the 80's showed up, I was forced to take it seriously. But I digress.

I learned the concept of itemizing small items into labeled bins and drawers from my dad, of which I still have much work to do in that department. The ones he filled up are still with me and are like time capsules, along with his meticulously hand written compartment labels that are steadily fading as the years pass. He always knew where every single tool, nail, screw, washer, and bolt was. He could venture into his little workshop in the front room of our house and either repair, construct, or repurpose anything. I always stood in amazement.

No money was spent for this undertaking except for the one sheet of 4'x8' plywood ripped down the middle, one sheet of 2'x4' plywood, and the 2x6x12's.  I already had the 2x4's. .All of the bins and containers and bins were already here, but in different locations. If I needed something here, it was always over there and vice versa. The wooden drawers to the lower right were from my childhood bedroom and were looking for a permanent home aside from a thrift store. Anyone can do this by just incorporating what you may already have around your home and bring it all in together. I guess I could have a second career as a professional organizer, but the last thing I need at this stage of my life is something else to do. While some think that much of this points to OCD, it is really only a simple desire to concentrate on one project at a time in an uncluttered work space with the necessary tools within reach. Also, if you return the tools and materials to the proper location after use, the disarray won't return. It was such a pleasure last night to make a simple repair to an electrical cord and not have to reinvent the wheel to do it. Now I must look for more things to fix, but I think they will have no trouble finding me.

Posted by Unknown at 1:37 PM No comments:

Email ThisBlogThis!Share to TwitterShare to FacebookShare to Pinterest
Welcome to the blog page. This is an effort to tell stories in the future that didn't quite get into the book,  HURRICANE. Perhaps it will lead into the next book, but for now, here we are.

In the meantime, the book, HURRICANE, is still available at the following locations:

Posted by Unknown at 5:28 PM No comments: